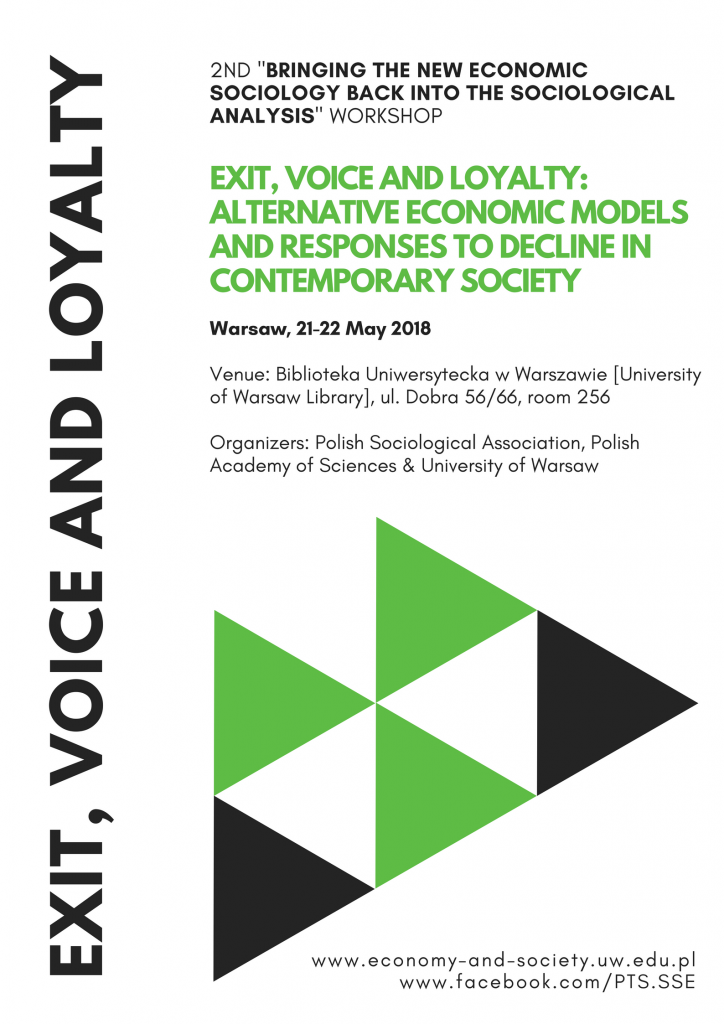 Albert O. Hirschman’s treatise on responses to decline in various contexts and domains, Exit, Voice, and Loyalty (1970), has been almost instantly welcomed as his most sociologically relevant contribution. This work opened a sociological box that can be researched without exhaustion.

The issue whether the social actors will go for exit, for voice or for loyalty when faced with downturn or decline in a particular context, or how their choices will impact on the attractiveness of other available options always leaves room for surprises and scientific discoveries. Thus, exit-voice-and-loyalty is in fact a sociological riddle, and as all good sociological riddles (such as the seminal strength of weak ties) it does not wear out. On the contrary, its value increases in time. The sociologist cannot just simply solve the problem for the last time, neither can she/he leave the problem unanswered. New empirical material related to crises, revolutions, risk, failures, downturns – in other words, social change – puts the puzzle in a completely new picture and indicates new solutions for resolving it. Hirschman himself, subsequent to the exit-voice dynamics of the 1989 upheaval in East Germany was compelled to reformulate his original thesis that exit deactivates voice and to record the scenario when private exit stimulates public voice eventually.

The start-up intuition of this Workshop in new economic sociology is that, as far as the empirical stimuli and challenges for sociological imagination are concerned, the contemporary humanitarian, political and economic context is similar to 1989, when the end of history thesis was launched. Although very demanding, because it provokes the sociologists and new economic sociologists to assess their system of values and to make a statement on issues that go beyond theory, the actual circumstances of crises, recovery attempts and alternative strategies of coping in which the academic work is carried out is very valuable for theory developing. This background not only indicates that the issue of exit-voice-loyalty is further actual. But it also reveals resources and types of reactions to downturn and decline that are more recent.

In this respect, various phenomena that are currently undertaken in new economic sociology, such as alternative economic models, sharing economy, increased political activism of diaspora, flow of refugees and migrants, can be framed as contemporary manifestations of the original exit-voice-loyalty puzzle. The alternative economic models, such as common ownership and Brexit, and the sharing economy could be framed as contemporary new forms of exit that borrow elements of voice. The increased political activism of diaspora seems to repeat the scenario of public voice caused by the possibility of exit that was witnessed by Hirschman and sociologists from Central Europe in 1989. Whereas the flow of refugees and migrants is a phenomenon of enmasse exit that could be researched also in relation with the types of voice, both pro- and against this exit, that it provoked.

The Workshop welcomes contributions dealing with such topics as:

The Organizing Committee hopes the Workshop will contribute to the conceptual and theoretical enrichment of the studies on exit-voice-loyalty in new economic sociology and sociology, it will create an apt platform for revisiting well established assumptions and paradigms, and help opening new research sites for empirical investigation.

The deadline for submission of abstracts is 10 December 2017.