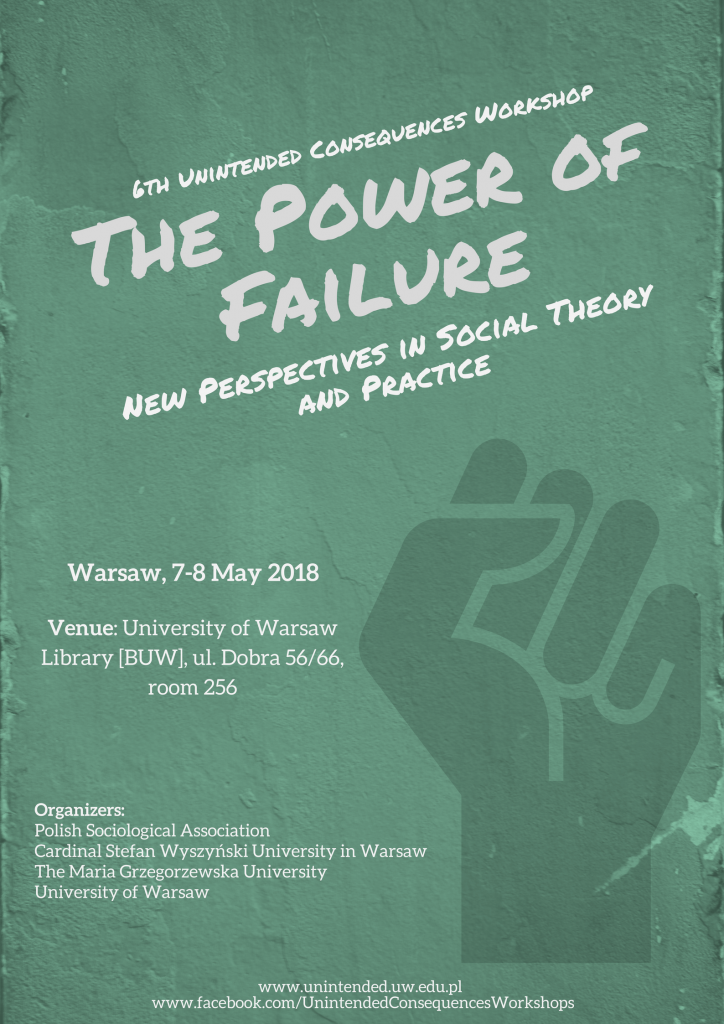 Deadline for submission of abstracts: 15 December 2017

The last decade crises, which emerged in such diverse domains as humanitarian, economic and political, challenged the sociological imagination to take up the phenomenon of failure and to give it a fresher look. Various issues were addressed, such as the possibility to predict failure, the modalities of coping with it, the attribution of responsibility, the dynamic of scapegoating, the reproduction of the institutional structures and power differential subsequent to episodes of crises and decline, and even the unexpected turning of failure into success in certain instances. The perspective changed accordingly from the micro level – wherein the dynamic of organizational and market failure was attentively scrutinized – to the macro level – in which the potential of these episodes of crisis and failure to effect the capitalist dynamics and the hierarchies of the globalized world was called into question.

All this sociological effervescence can be framed as, more or less consciously, spinning around the following major questions: Can failure be anticipated or predicted? What is the role of ignorance in rendering major episodes of crisis and public policy failure as unanticipated? What is the relation between failure and social change? In what conditions do episodes of failure effect social change? Even more, when is the social change so comprehensive that social actors consider that the episode or succession of failure/s unexpectedly resulted in success?

What renders these inquiries as sociologically ‘major’ is less the fact that they emerged in relation with episodes of crisis, but that these can, in fact, be addressed in relation to any domain or social activity, related or unrelated to the recently witnessed episodes of failure at a global scale. The power of failure to effect (or not) social change and to lead (or not) to success is an issue that goes beyond the visible manifestation of power games between major financial, political and economic actors. The power of failure concerns in fact the social life in its entirety. And although the major and spectacular episodes of failure and crisis are ‘needed’ in order to render this power obvious and to call attention to it, the fact of the matter is that the power of failure does not need such a grandiose arena to manifest.

For this reason, the Workshop proposes to depart from the conventional manner of discussing failure and the power of failure as something out of the ordinary and paradoxical, and to bring in contributions which deal with this topic in terms of everyday life and practice. The Workshop welcomes contributions dealing with such topics as:

The Organizing Committee hopes the Workshop will contribute to the conceptual, theoretical and empirical enrichment of the studies on sociology of failure and recovery, it will create an apt platform for revisiting well established assumptions and paradigms, and help opening new research sites for empirical investigation.

The deadline for submission of abstracts is 15 December 2017.

The Unintended Consequences team also welcomes themes for mini-workshops. These should be approx. 500 words long and relate to the topic that is announced to be the focus of the unintended discussion, which is organized in May 2018. The mini-themes will be integrated on the agenda of the workshop, and usually held on its second day. The deadline for submission of mini-workshop proposals is 15 November 2017.
More about mini-workshops http://unintended.uw.edu.pl/unintended-conferences-workshops/call-for-mini-conference-proposals/

Both types of proposals should be submitted to Adriana Mica (a.mica[at]uw.edu.pl). The personal information and institutional affiliation should be provided along with the proposal.

Notification of paper acceptance is 15 January 2018. The deadline for submitting full papers is 10 April 2018.

Registration (transfer of workshop fee) is due by 1 March 2018. The regular fee is 130 Euro. The fee for members of Polish Sociological Association in good standing is 110 Euro. The conference fee covers lunch breaks, conference dinner in the evening of the first day of the conference.

About Unintended Consequences Workshops
These meetings provide a platform for discussing and presenting developments and refinements, both in terms of theory and empirical research, and to establish a network of scholars interested in sociology as analysis of the unintended.

The first two meetings took place in Gdańsk. From the third year onward, the workshops also moved to Warsaw. Currently, the meetings are held on the premises of Warsaw University Library. Occasionally, these also benefit from the financial support and patronage of Ministry of Science and Higher Education, and subsequently Polish National Science Centre.